An important chapter in industrial history

Rise and fall of the condenser tubes

Condenser tubes as heat exchangers in steam engines became important from around 1850. In the 20th century they became a prestige product of Wieland due to innovative alloys and manufacturing processes. It was not until the advent of new materials in 1980 that the product range was discontinued.

While the role of the steam engine for industrialisation is part of general education, little is known about an important innovation in this context: Only when it became possible to move the cooling of the steam from the cylinder to a downstream pipe did the steam engine become widely accepted as an energy supplier for industry and railways. While heat exchangers made of copper or copper alloys had played a rather manageable role in beer coolers and distillation apparatuses until the middle of the 19th century, they now became a much sought-after industrial product.

It is no coincidence that Wieland started tube production around this time. At the beginning of the 20th century, Wieland became an important supplier of condenser tubes which then were smooth inside and outside and had diameters between 15 and 25 millimetres. The newly introduced extrusion process not only allowed the forming of particularly strong brass grades but also longer tube lengths – and this with good economic efficiency.

While initially only copper-zinc alloys were used for condenser tube production, the number of alloys rose steadily in the following decades. In 1933, tubes made of copper-nickel compounds, so-called marine brass (with 1 percent tin content), semi-tombac, aluminium brass and copper bronze were also offered. In addition, there were tubes that were tin-plated in an immersion process. Due to the sensitive application in the environment of steam engines, the condenser tubes had to undergo complex certification procedures by the customers.

After the Second World War, customers included big names in industry such as AEG, MAN, BBC and Westinghouse – condenser tubes were among Wieland's prestige products. But although the production of 25-metre long tubes had been possible in Vöhringen since 1974, condenser tube production had passed its zenith: Increasing competition, but above all the emergence of stainless steel and titanium tubes changed the market environment.

This now offered much better sales and earnings opportunities for pipes for domestic installations. Consequently, Wieland took a logical step in 1980: The production of condenser tubes was discontinued. 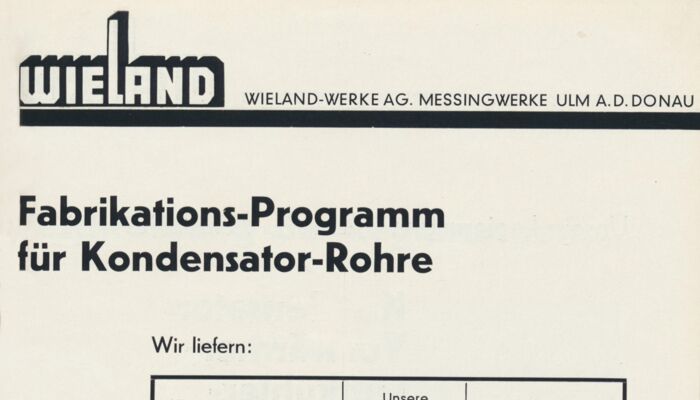 A brochure from 1933 shows the variety of alloys Wieland offered for the highly stressed and safety related condenser tubes.