Courage to innovate – as the basis for success

As in other business areas, Wieland has always been up to date with new processes for tube production and has continued to develop machines innovatively for its own needs. This resulted in machining processes which still set standards today.

Initially, the tube production processes at Wieland were still of a manufacturing nature. Comparatively small quantities were produced with great manual effort. It was not until around 1870 that two new techniques were used for drawing: chain drawing benches and drawing drums which enabled the production of particularly long tubes which were initially wound into a coil. From 1901 onwards, the extrusion process revolutionised tube production. However, it was not suitable for all areas of application, which is why tube drawing was further developed in parallel. For long tube lengths, increasingly powerful drum drawing machines were used. For many tubes – such as particularly thick-walled tubes or those made of particularly hard alloys – the process was not suitable. For a long time, such so-called straight tubes could only be drawn in limited lengths.

The solution to this challenge is a prime example of how Wieland is constantly using new, even risky, processes and is also prepared to accept initial failures: In 1952, an innovative combined drawing machine from the manufacturer Schumag was put into operation for the first time for straight and continuous drawing of tubes. As was often the case in the past, the machine was adapted to individual requirements by means of complex in-house developments.

Because two drawing devices were operating on the SCHUMAG machine, the drawing process could be taken over and continued by a second drawing jaw while the first one returned to its starting position. This process, thanks to numerous in-house optimizations, finally enabled the enormously fast and precise drawing of straight pipes of almost any length. The principle of the combined drawing machine was so groundbreaking that the process – in addition to extrusion – is still used at Wieland today. 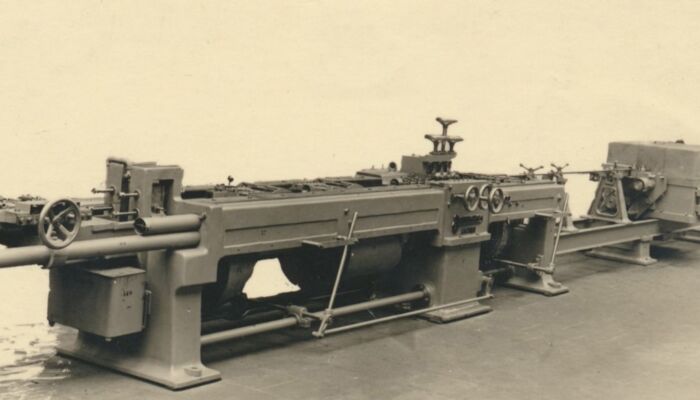 The combined drawing machine SCHUMAG allows not only - as in the photo - the drawing of rods and wires, but also of straight and endless tubes.

The photograph from 1980 provides a good view of the ingenious pulling mechanism of a SCHUMAG drawing machine.