"Curtains up" for professional lay actors

The legendary Christmas fairytales in Vöhringen

For a long time, lavishly and lovingly staged fairy tale performances in the Vöhringen factory were a highlight of the year. Especially for the children of the employees, who made their equally grand appearance in front of a large audience at the Christmas celebrations.

Even today, many participants still have fond memories of these major cultural events, which regularly caused a sensation in Vöhringen in the 1950s and 1960s: the fairytale performances, for which the large press shop hall was transformed into a theatre hall. Inventories were cleared away, countless rows of chairs set up and a large stage was built.

Numerous employees prepared themselves meticulously for the big day in their free time, also behind the lovingly and elaborately designed scenes. But the main characters - and sometimes also the main actors - were not employees, but their children! Guided by adults and in some plays also supported by them on stage, they rehearsed a different fairy tale as a play every year. And this was certainly not just child's play, but was performed according to all the rules of the art: with high standards and a lot of passion.

The initial show in 1950 was an oratorio in which the Christmas story was played and sung, mostly by children. This was so successful that larger projects were soon tackled. In 1954, for example, a large number of young and adult performers populated the huge stage, which was equipped with impressive scenery. This time the "Pied Piper of Hameln" was performed. At the Christmas party two years later "Rumpelstiltskin" was performed.

Children also took part in other parts of the Christmas celebrations: as actors, singers or extras, often as angels standing on a huge Christmas tree at a lofty height or suspended on thin ropes under the high hall ceiling.

We can only guess today how much time the stage designers, costume tailors, choreographers, directors, make-up artists and performers invested in the preparation phase.

The stage fright of the little actors before each performance was probably considerable, as the halls were always filled to the last seat. Not only parents and other company employees were present, but also celebrities: For Chairman Karl Eychmüller and other executives it was paramount to honour the performances with their presence every time. 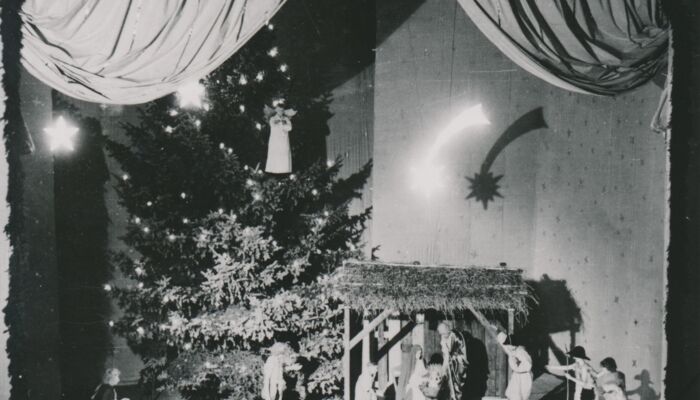 Children of company employees were already performing in the Christmas Oratorio in 1950. 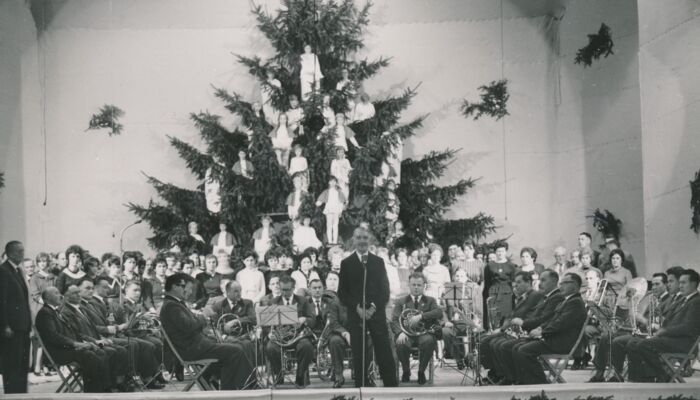 In 1960, children participated in the Christmas party, too. Also on stage, at the microphone: Chairman of the Board Karl Eychmüller. 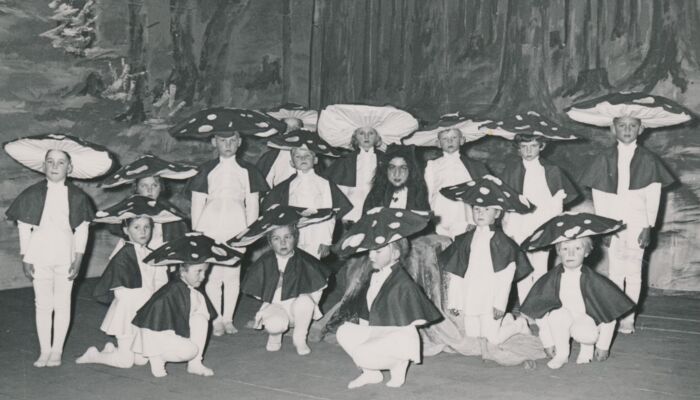 Elaborate costumes also characterised the children's theatre performance in 1957. There is no record left of who played the evil "Rumpelstiltskin".

If one did not know better, one might think that the photo of the 1953 performance was taken at the Stuttgart State Theatre. The performance was of "Sleeping Beauty". (Copyright: Foto-Studio Heim, Vöhringen)