No playing with fire

From an early age Philipp Jakob Wieland developed a fascination for fire extinguishers. Consequently, in 1822 he received his first patent for a fire extinguisher developed by him. For a long time these devices were part of the company's product range; the founder worked on improvements for the rest of his life.

Fire must have fascinated Philipp Jakob Wieland from an early age. Long before he became a bell founder and had to deal with its work-related dangers, the nine-year-old created a thoroughly successful drawing showing a fire extinguisher in action and adds the words: "This is how you spray on fire". When he opened his business 18 years later, the advertisement in the "Ulmisches Intelligenzblatt" (local newspaper) listed "Fire extinguishing machines" in first place of a long product range.

In the first few years, the young entrepreneur seemed to have been intensively involved with the technology and improvement of these relatively new devices. Details of his development work are unfortunately not known – but a printed matter documented impressively the pioneering spirit and innovative strength of Philipp Jakob Wieland: On 22 June 1822, a local newspaper published the following note: "11 June 1822 - Patent granted to P. J. Wieland for his exclusive distribution of the improved hand-held fire extinguisher invented by him. The innovation distributed as "Wieland'sche Armspritze" is purchased by the city of Ulm alone in 12 units.

It was not Wieland's last development in this field. Again and again he created new, more powerful extinguishers, later also those on wheels. And his notebooks contain numerous thoughts and considerations, sketches and calculations on this subject. Shortly before his death, he was still working on possible improvements to his fire extinguishers. There are a number of reasons why these were becoming less and less important for his company: On the one hand, the founder had to concentrate a large part of his innovative power on melting and casting processes as well as on the development of new alloys.

On the other hand, from 1866, another up-and-coming manufacturer in Ulm – Conrad Dietrich Magirus – concentrated his work exclusively to the development of fire extinguishers and vehicles. Nevertheless, fire extinguishers were still part of Wieland's portfolio until the end of the 19th century, before the company increasingly turned to manufacturing of semi-finished products.

The two cylinder fire extinguisher mounted on a carriage was one of the most modern and powerful of its kind around 1840. 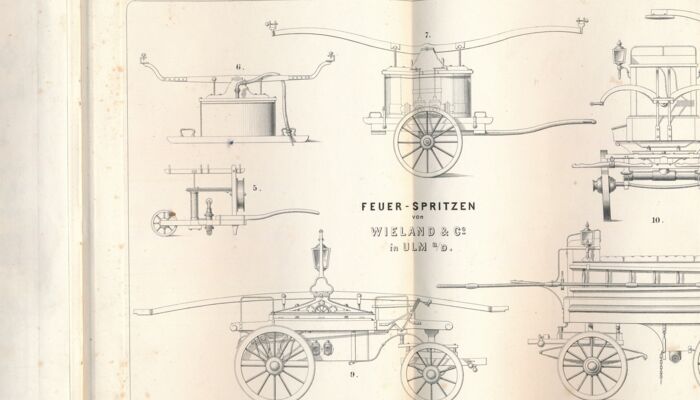 In a catalogue from the 1880s, Wieland offers a wide range of fire extinguishers, as well as spare parts and accessories such as fire helmets.