Karl Eychmüller – the personification of Wieland

Born in Ulm in 1892, the son of a building contractor first completed a banking apprenticeship after school and then studied business administration in Cologne. He spent the entire First World War as a soldier, and from the beginning of 1919 - as a replacement for his late uncle - he held the post of director at the Gerabronn commercial bank. As soon as he arrived there, Max R. Wieland asked him to join Wieland & Cie. – a wish which the 27-year-old gladly granted on 1 October 1919.

This marked the beginning of an extraordinary career, the details of which would go beyond the scope of any other company. One year after joining the company, he was granted power of attorney, in 1923 he was appointed to the Management Board of the public limited company, and after the death of Max R. Wieland in 1935 he became his successor as Chairman of the Board - equipped with all the powers of his predecessor.

After the Second World War, which saw him in the role of a "military economy leader" and at the end of which he prevented the bombardment of Ulm by courageous intervention, he became Lord Mayor of his home town for a few weeks - then he was deposed and imprisoned by the Allies because of his role in the Nazi economy. Nevertheless, in the course of the denazification process, the court of arbitration came to the "absolutely clear" conclusion that Karl Eychmüller was "not a convinced supporter of the Nazi tyranny" and classified him as a "nominal member".

Back in charge of Wieland, the reconstruction of the company was one of his outstanding entrepreneurial achievements. He was also active in numerous associations and committees - not least as a member of the board of the Ulmer "Münsterbauverein" which was dedicated to the preservation of the minster. The busy man recharged his batteries on long, lonely walks in the woods; when dealing with challenges he was characterised by composure, courage and confidence and, above all, a deep human sincerity and benevolent kindness towards others, primarily his employees. The claim that Wieland should be a true "home away from home" for its employees stems from him.

On the occasion of his move to the Supervisory Board in 1972, one speaker summed up somewhat pathetically, but nevertheless aptly in his speech: "In your belief in the victory of good as the meaning of history ... you have used all your strength to work for truthfulness and sincerity, for cleanliness and noble objectivity". The still unforgotten man died in 1981 at the age of 89. 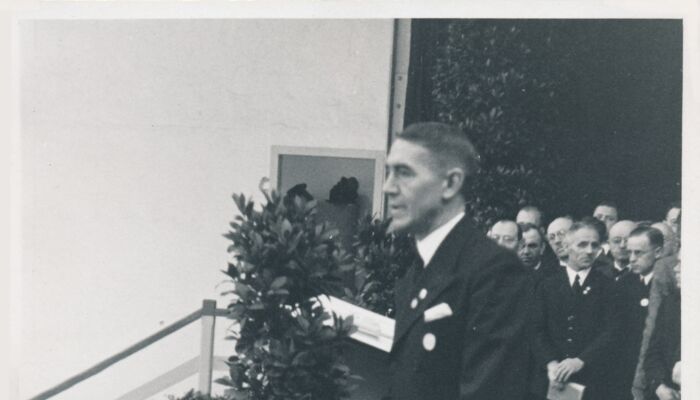 Karl Eychmüller during a speech to the staff. He was held in high esteem by the staff because of his basic social attitude and his management philosophy based on mutual respect. 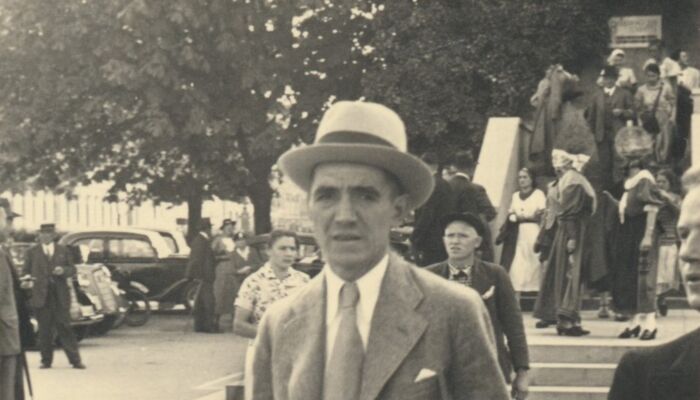 Karl Eychmüller – shown here on a company outing in 1937 – was also highly regarded for his closeness to people and their concerns. 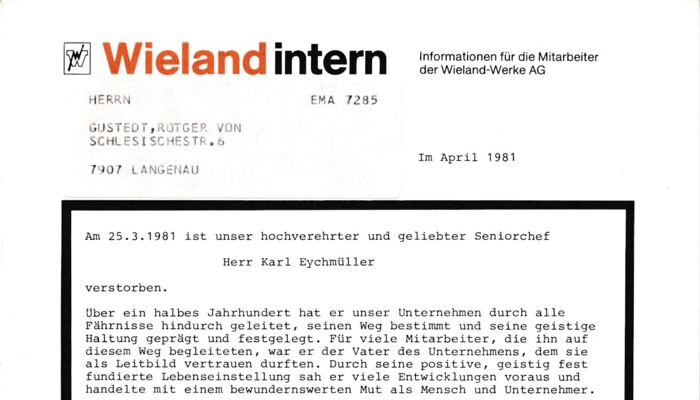 Wieland internally commemorated Karl Eychmüller in April 1981. Above all, his "mentally sound attitude towards life" and his "struggle for social balance" were emphasised.