With new alloys to new products from rolled sheet

The innovative rolled sheet business required special materials. Philipp Jakob Wieland developed these from 1828 – mainly through experience and trial and error. The brass sheets developed in this way were ideally suited for forming – and thus for many new products.

When Philipp Jakob Wieland acquired the Bochslermühle mill in 1828 and subsequently converted it into a rolling mill, he was breaking new technological ground in many respects. The machines and tools for rolling first had to be developed and built. Above all, copper alloys were required which were suitable for rolling on the one hand and which could later be formed into the desired end products on the other.

It was, in principle, like the squaring of the circle, as the basic metallurgical knowledge was still largely lacking at the time. Instead, however, Wieland had excellent training and a wealth of experience, not least through his travels through half of Europe. In his foundry, which remained in the main building in Ulm's Rosengasse, he developed alloys which were particularly suitable for rolling and later forming. He proceeded according to the "trial-and-error" principle: The assessment of the rolling process and subsequent bending and fracture tests as well as colour assessments decided on the suitability. By 1832, four copper-zinc alloys with copper contents of between 61.8 and 68.9 percent had crystallized.

Initially, the brass sheets were mainly used in the in-house production of metal goods – such as pans, chandeliers, fittings or the innovative chains for scales and lamps, for which Wieland received a high distinction in 1844. 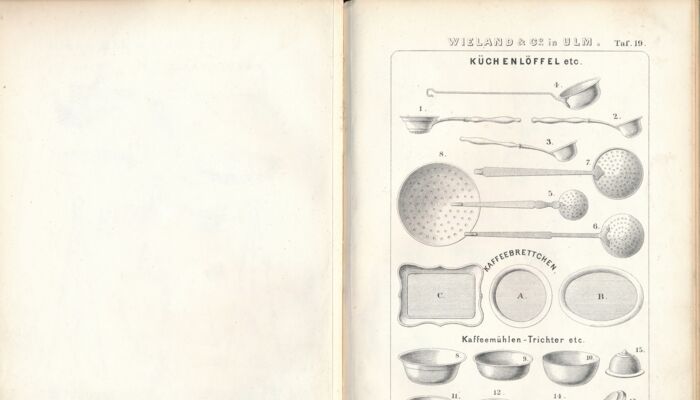 The undated catalogue (probably from the 1880s) shows how broad the Wieland product range for objects made of rolled and formed copper alloys was. 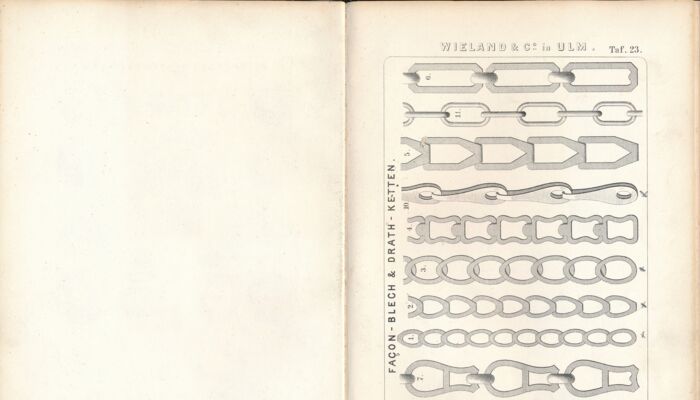 "Wieland chains" made from shaped stampings were produced without soldering or rivets and were awarded a prize in Berlin in 1844 as "not uninteresting peculiar object".

In 1866 pure copper sheet was added to the product range, and in the following decades little changed in the alloys for rolled sheet – apart from a gradual reduction in the tin content.

It was not until the turn of the century that the number of alloys increased dramatically, partly because the leaded variants "Quarta" and numerous differentiations of "Tombak" were added. In 1908 Wieland cast 40 alloys, half of which were for rolled sheet.