When mining on asteroids picks up speed

What is more obvious with regards to mining than an asteroid? Asteroids are true deposits of valuable minerals and metal, and these slowly run out on earth or are harder to recover. The logical consequence is to look into space.

The year is 2080 and the third Mars mission has already been successfully completed. Humans have accessed Mars and created a stationary base there for intensive research. Now the focus is on the near-earth asteroids in order to begin the recovery of raw materials that have become rare on Earth. Earthly resources such as ores, rare soils and metals are scarce and expensive. Now, the procurement of new resources from space is all the more worthwhile. The new rocket propulsion, which has been successfully used for the Mars missions since 2050, is now also being used for the transport shuttles transporting the raw materials mined on the asteroids to Earth. Suddenly, transport costs have become unexpectedly profitable. But even the salvage itself can be carried out with little energy input, because the low gravitational force on the small asteroids means that the relatively loose ores and rocks in the structure can be dug up easily.

In the beginning, the C, S and M asteroids in close proximity to the Earth were targeted to recover carbon, water and above all metals. Restrictions reduce the choice, because the required perfect place in orbit or the necessary low rotational speed of the asteroid are essential criterions. Nevertheless, in 2086, several hundred tons of copper, nickel and other precious metals will be mined from the surface of several asteroids, cleaned and brought to earth. A decade later, researchers will be exploring dozens of other asteroid species with suitable iron, nickel, cobalt, platinoid and rare earth elements to ensure that the growing demand on Earth is met. 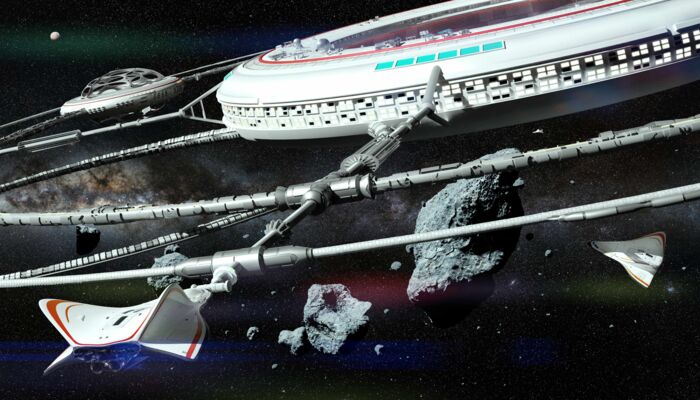 The mining of raw material and the recovery of new ressources from space is becoming more and more worthwhile – both are becoming rare on earth. The modern shuttles that are used for transportation benefit from proven drive technologies.

The successful and profitable mining of asteroids, which was only possible through scientific progress, reduced the mining of raw materials such as metals and rare soils to a minimum. In addition, part of the profits from mining in space were used for renaturation measures in mines and mining areas on Earth to restore the ecology.

In 1903, a good 180 years earlier, the founder of modern cosmonautics, Konstantin Eduardowitsch Ziolkowski, was the first to think about mining raw materials on asteroids. For him, this remained a dream, but mankind made this fiction a reality in 2080.