The bigger, the better

Over the course of time, cast plates as a starting material for sheet and strip became larger and heavier. Whereas slabs weighed a modest 45 kilograms in the middle of the 19th century, today they weigh more than 10 tons.

When bells had long been a niche product at Wieland's Ulm plant, the ancient principle of sand moulds was still used for the production of casting moulds. They were used to cast cuboid plates which were later rolled into sheets. In 1886 the average weight of these so-called slabs was still a modest 45 kilograms. With an annual production of more than 1,000 tons, this meant heavy labour for the workers.

After a new foundry went into operation in 1891 in the Voehringen works, the company switched to stone casting. The 18 millimeter thick plates with a width of 42 centimeters and a length of 80 centimeters weighed then just under 53 kilograms – and until 1925 the weight had increased by another 20 kilograms due to ever greater thicknesses. In the early 1930s, the Metallwerke Schwarzwald even cast slabs weighing 250 kilograms – but 11 workers were needed to handle them, which was a life-threatening operation!

Casting with permanent moulds, introduced in 1926, allowed even larger and thus heavier casting plates. In Vöhringen, this process enabled to cast slabs weighing more than 500 kilograms and measuring one meter long, 60 centimeters wide and 10 centimeters thick. When the continuous casting process was started in 1933, the new technology was used to produce slabs weighing up to 450 kilograms as starting material for rolling strip.

After the Second World War, ever larger and thus heavier slabs were cast, mainly for reasons of economy, but also in order to be able to produce longer strip veins without welding. At the end of the 1950s, slab weights of up to 1,700 kilograms became possible. Wieland's largest single investment up to then allowed slabs weighing up to 4.5 tonnes from 1973 onwards. And since a further expansion around the turn of the millennium, slabs weighing approximately 10 tonnes are being cast in Vöhringen, making them around 230 times heavier than the sand cast slabs from the middle of the 19th century. 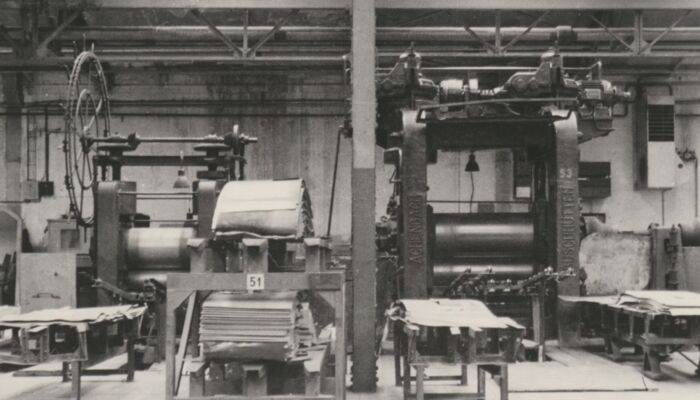 The rolling mill (left) set up in 1895 clearly shows how small and therefore light and easy to handle the cast plates were at that time. 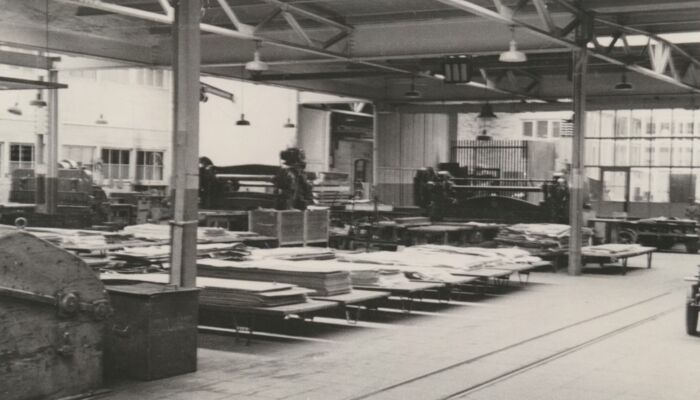 In the cutting room, the slabs were cut to the appropriate format for rolling. Compared to today, the slabs on the photo from 1951 are still comparatively small.