The evolution of robots

The robot technology 3.0 started with the use of the AI component

Hardly any other topic did split critics and supporters more than AI and robot technology. And rightly so. Only the knowledge of how man and machine could work together as a team as well as extensive pilot scenarios showed integrative solutions.

The industrial robots in the years around the millennium were mainly single-armed machines controlled according to fixed process sequences, usually fixed in one place. These mainly took over strenuous and dangerous tasks from people in order to make production more efficient. People could therefore take more care of process technology and control processes and also protect their health. In the years between 2020 and 2040, so-called weak and strong AI systems were developed and integrated into first applications and the new robot generations. In the years after 2025, many new industry-specific job profiles were created to optimize and integrate the new technology.

In 2030, the first household robots were available to take over activities in household and community kitchens. The robots with AI-based software were capable of recognizing and learning increasingly finer processes themselves, and finally exchanging information collectively via a network. The finest sensor technology on the robot surface, the so-called e-skin, was able to sense fine details, feel temperatures and react accordingly. In 2035, the first urban farmers were deployed, who took over tasks in communal gardens, but also independently mowed agricultural fields. In hospitals, humanoid robots complemented the teams of nurses, carers and doctors to relieve them of chores.

Today, in 2040, people act in the background. They monitor processes, interact with machines and optimise processes that could not yet be learned. Both human and robot benefit from each other.

There is a whole range of robot applications with implemented artificial intelligence, which one does not inevitably think of. Prostheses have undergone a lot of further development and are much more comfortable to wear. And here, too, a lot has happened in terms of fine motor skills combined with learning software. With the aid of bio implants to connect the nerve tract to the digital interface of the prosthesis, prosthesis wearers regain almost their original mobility and a certain body feeling. Here, too, copper and special metal alloys have led to innovations in many decisive points in robot precision mechanics, such as joints, surface sensors and natural network technology, data traffic and radio technology, which were necessary to implement these great achievements. 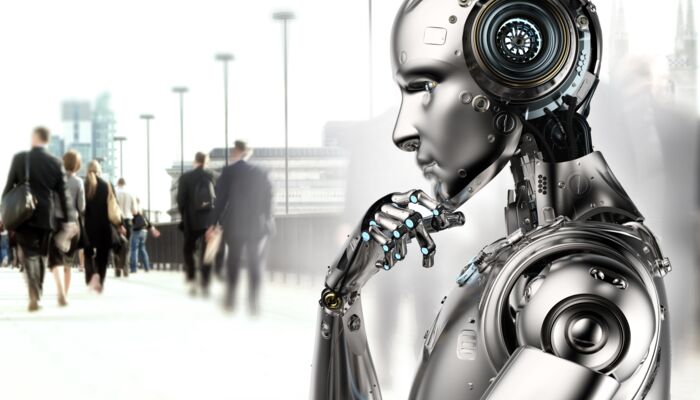 Man and machine work sensibly together as a team. Man is in the background, monitoring and optimizing processes and thus ensuring that the robot continues to develop.