Triumph of a revolutionary technology

As one of the pioneers, Wieland entered the extrusion process in 1901. Further machines were quickly added and completely new processes and procedures were created. By 1939, seven extrusion presses had been installed in Vöhringen - some remained in operation until the recent past.

Even before the first extrusion press was installed in Vöhringen in 1901, the course for the future was set there: a planned building for casting, rolling and drawing brass rods was no longer realized. Instead, an extension was built next to the foundry, where the first used press – which was later returned – was installed, as well as a brand-new one with a pressing force of 9 meganewtons. The latter cost an impressive 21,000 Marks at the time, had direct drive with pumps acting directly on the press cylinders and was in service as Press 1 until 1970. An almost identical system with a slightly larger crosshead opening and longer stroke was added as Press 2 in 1904. 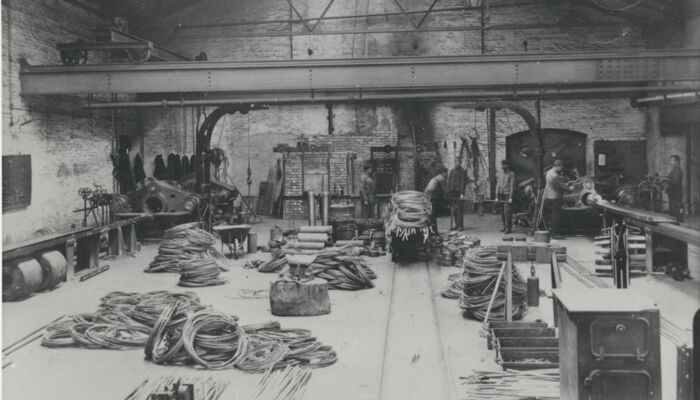 Presses 1 and 2 in 1905, both with a press capacity of 9 meganewtons. The furnace with coal firing is visible in the background. 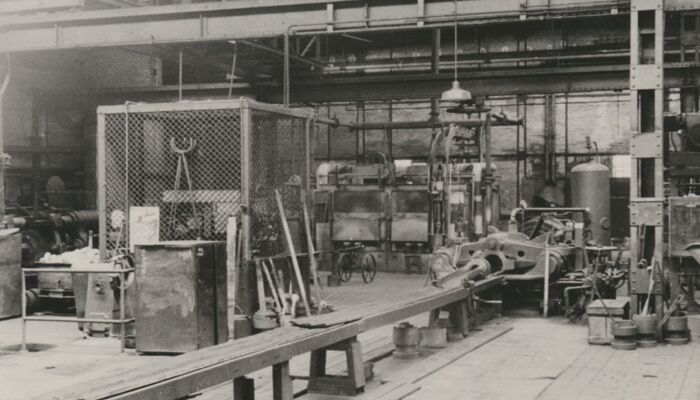 In 1909, the extrusion plant processed 17.1 tons of material per day, almost doubling output compared to 1903 (9.7 tons), and working hours were changed to two-shift operation. And since the patents for the extrusion process expired, Wieland designed and built its own extrusion press for the first time; it went into operation as Press 3 with an astonishing 13 meganewtons press force. Like the next Wieland design – Press 4 dating from 1914 – it was a four-column press and specially designed for tube production. After targeted retrofitting, it was possible to produce tubes for the first time by transfer moulding with press 4 from 1926.

A further innovation followed as early as 1928: Wieland acquired Press 5 from Borsig in Berlin, which for the first time operated in vertical direction. This significantly increased the uniformity of the press tubes – and thus allowed the extrusion of extremely thin-walled tubes. Press 6, which was purchased just one year later, operated in a completely different direction: It was again built horizontally and with its pressing force of 20 meganewtons was considered to be the largest extrusion press in the world at that time. Accordingly, it was used to achieve large pipe diameters and for alloys with a high copper content, and later also aluminium.

Press 6 operated with an enormous 20 meganewtons press force from 1929. That much power had its price, it cost an impressive 160,000 Reichsmark.

This also applied to Press 7, which was set up in 1939. With a press capacity of 18 meganewtons, it was intended for aluminium profiles and tubes, but zinc alloys were also processed on it during the war. Modernised several times and converted for brass processing, it operated for an incredible 60 years until 1999. On the eve of the Second World War, the seven extrusion presses in Vöhringen processed an impressive 12,500 tons of material per year.