Venice from its most beautiful side

Brass from Wieland gives the "Fondaco dei Tedeschi" its shine

The "Fondaco dei Tedeschi", an imposing Renaissance building on the Canale Grande, was extensively renovated and redesigned until 2016. Brass flat bars from Wieland were used for parapets and railings – also because of their outstanding optical quality.

Venice was a leading sea and trading power from the High Middle Ages up to the early modern times. "La Serenissima", the "Most Serene Republic of Saint Mark", was an important hub between East and West, North and South, thanks to its fleet.

The lagoon city came to immense wealth, which is shown in numerous pompous buildings, making it the urban attraction that still entices millions of tourists every year. In the Middle Ages, on the other hand, it was mainly merchants who came to Venice from all parts of Europe to do business there. For the Germans, the "Tedeschi", who at that time included Hungarians, Flemings and other Northern Europeans, the "Germans’ warehouse" or "Fondaco dei Tedeschi" was established in 1228. And this in a prime location, on the Canale Grande, right next to the Rialto Bridge. There - and only there – the foreign merchants were allowed to go about their business. They imported, primarily for the Nuremberg Stock Exchange, mainly spices from Asia and Africa as well as Mediterranean fruits and oils.

Although the imposing building burned down in 1505, it was quickly rebuilt, including the arcades at the landing site – and decorated with frescoes by Titian, which were, however, not preserved. After the economic decline of Venice and the end of the Republic, the building was put to various uses, from 1870 to 2011 it even served as Venice's main post office.

In 2008, the Benetton Group acquired the "Fondaco dei Tedeschi" and commissioned the Rotterdam-based architectural firm "Office for Metropolitan Architecture" (OMA) around star architect Rem Koolhaas to transform the complex into a shopping and exhibition centre. By 2016, a fascinating building was created that perfectly combines tradition and modernity, sets urbanistic accents and, in addition to luxurious shops, its covered inner courtyard provides a public space that is accessible at all times to the public.

Because of the elegant, high-quality surfaces, the planners opted for copper materials for balustrades, stair railings and other furnishing details. Wieland supplied the majority of these in the form of brass flat bars. They were used, among other things, on the roof terrace which, for good reason, quickly became a first-class tourist magnet: it offers one of the most spectacular views over "La Serenissima". 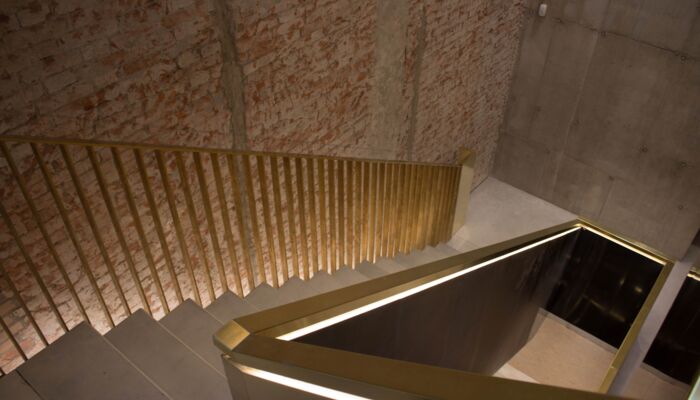 Brass flat bars from Wieland not only ensure safety in the staircase of the "Fondaco dei Tedeschi" – they also set valuable visual and haptic accents. 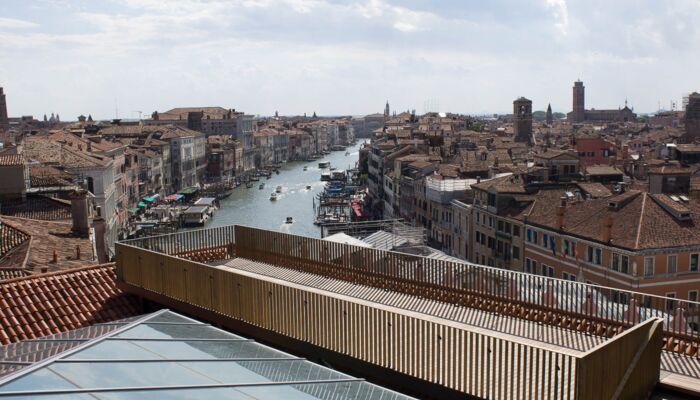 The view from the roof terrace is breathtaking – it is open to the public and has long been more than an insider tip for visitors to Venice.