Wieland experiment launched into space in 2008

On board the space shuttle Atlantis, an instrument developed for metallurgical experiments by the University of Ulm was launched to the International Space Station ISS. On board were also Wieland samples, which were to be investigated in weightlessness.

When on 7 February 2008 the American space shuttle Atlantis lifted off with roaring engines from the Cape Canaveral spaceport into the blue sky above Florida, not only the seven astronauts on board were delighted about the smooth launch after several postponements. 7,700 kilometres away, in Ulm, numerous people followed the fiery spectacle with particular interest. In particular, those scientists from the University of Ulm who had developed an apparatus called the "electromagnetic levitation system". Parts of the device, weighing more than 400 kilograms, were on board, others would follow on later flights. Assembled by astronauts in the European space laboratory "Columbus", the facility could then use strong magnetic coils to heat metal alloys up to 1.800 degrees and observe individual metal droplets floating in weightlessness. The chemical-physical processes involved in the melting of metal could be better analysed, so that, for instance, new alloys could be developed from these findings.

This topic was also of great interest to Wieland which is why copper alloys were also on their way into orbit with the "Atlantis". Their analysis in the "electromagnetic levitation system" should help to develop new copper materials and further optimize existing manufacturing processes. The results from these tests are understandably still subject to secrecy. Nevertheless, the "space adventure" shows that Wieland – as has always been the case in the company's history – spares no expense or effort in terms of research and development to be at the forefront of technological developments, even at an altitude of 400 kilometres above the earth. 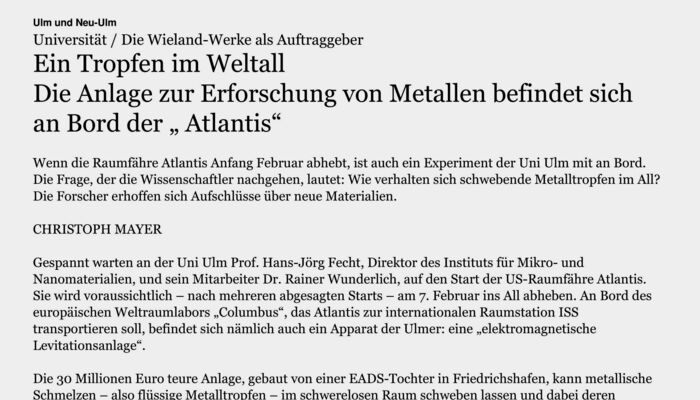 Shortly before the launch of the space shuttle, the local newspaper Südwest Presse Ulm reports in a full-page article about the device developed by the University of Ulm and Wieland's planned experiments. 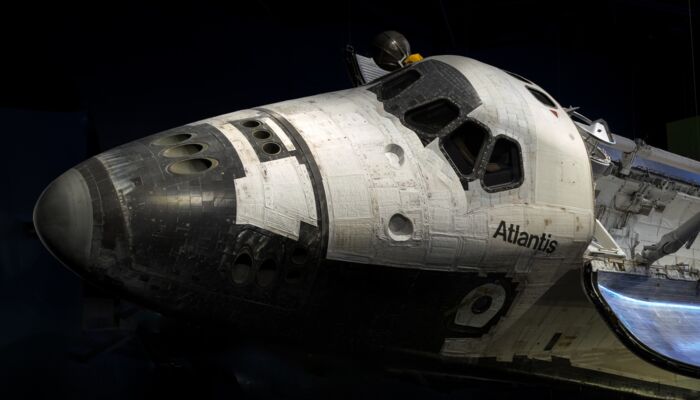 The space shuttle "Atlantis" flew 33 times into space between 1985 and 2011. On the STS-122 mission it transported copper alloys from Wieland to the ISS.