Wieland did not manufacture tubes until 1850 – but then properly

Initially, tubes did not play a role at Wieland. The business unit only started up with the introduction of new production technologies, initially in Ulm and at the Herrlingen plant. However, due to numerous further developments, the division then rapidly gained in importance.

When Philipp Jakob Wieland started his business in 1820, he soon manufactured a wide range of products – but for a long time no pipes. Pump cylinders for fire engines and beer pumps were cast and then ground, water pipes were still made of lead. The site at the ‘Bochslermühle’ mill in Ulm, established in 1828, manufactured wire and sheet metal, but no pipes. Particularly since the traditional artisan coppersmiths were still responsible for this work.

It was not until 1847 that the production of tubes" began at the new Herrlingen site. The challenge: The then prevailing production method for tubes by curling a strip of sheet metal and closing it at the seam with a simple weld was unsuitable for copper and brass tubes. They had to be soldered at the longitudinal seams, a technique that was still in its infancy in the middle of the 19th century. The difficulties were correspondingly high, much had to be developed by trial and error and the reject rates were high. In the Ulm plant, pipe sockets were therefore also produced by driving and pressing sheet metal.

After soldering, the tubes were drawn further and subjected to several intermediate annealing processes. This was a difficult job that required a great deal of skill and experience – and because of the dissolution of the soldered structure, the soldered seam was ultimately no longer visible. For drawing the tubes, mostly self-built drawing benches were used, based on Leonardo da Vinci's inventions. For a long time, the draw benches worked with toothed or threaded rods, belts and ropes and a lot of muscle power. Later, pulleys supported the strenuous work.

Ultimately, the costly production of tubes remained a predominantly artisanal area over the first decades. Since the demand for tubes was still limited – so was the portfolio of products made from them.

It is not known whether and how Philipp Jakob Wieland used water power for pipe production at his Herrlingen site; there are no records of this. What is certain is that from 1864 he opened a new, technologically much more modern chapter in pipe production at the Ulm plant. 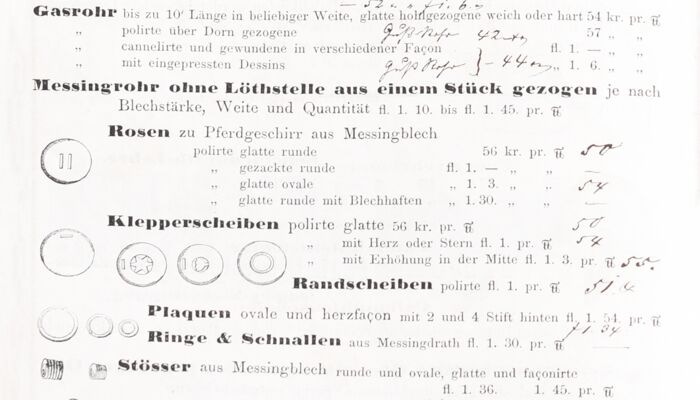 The range of pipes was still manageable in 1866. Wieland began to draw cast blanks into seamless tubes only this year.

Simple draw benches with racks required a lot of muscle power despite the support of the hand crank. To absorb the forces, the legs of the draw bench were buried in the ground.